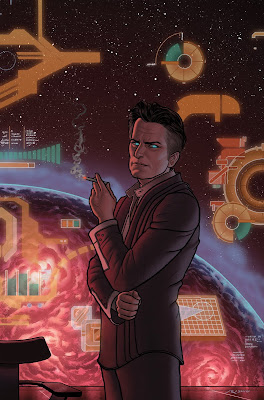 Another convention come and gone. This year's New York Comic Con was ridiculous. Thanks so much to everyone who stopped by and kept me busy drawing and/or selling stuff. It's always such fun meeting fans and fellow artists alike. I LOVE IT.

And speaking of being elusive, wow - I have not been doing a good job at keeping up this blog. Sorry you guys. I hereby promise to post much much more often. After repeated nudging from Paolo Rivera, I'm going to take a page from his blogging playbook (do they have those?) and start solidly posting on specific days of the week. This Friday all of that will begin with a brand new feature to the site. See you then.

Okay, Comic Con stuff - As I said before, I kept busy drawing pretty much through the duration of the weekend. Here's my first sketch from Friday, Black Cat: 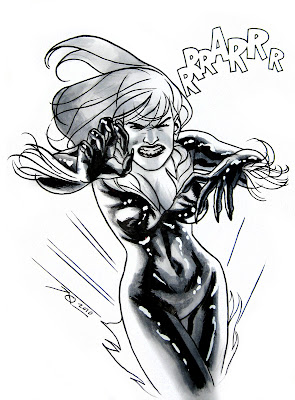 I've got a backlog of these to post from NYCC and last month's SPX, so expect to see many more in the next coming weeks.
Outside of drawing, I eventually made my way over to the Dark Horse booth for my Star Wars signing. There, I stumbled upon this: 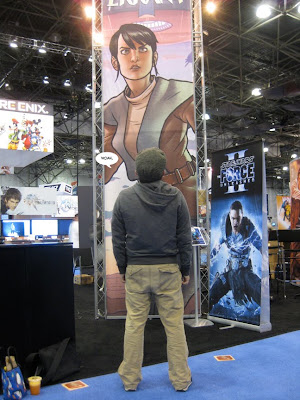 It's the big ol' Knight Errant banner from Star Wars Celebration! Here I am studying all of the little places I messed up on the cover.

Which apparently angered the real life counterpart of Kerra, because -- 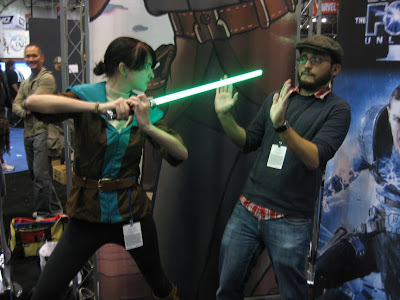 Thankfully I escaped with all my limbs intact.

In all seriousness though, it was great to finally meet the real world Kerra, as it was to meet Mass Effect scribe Mac Walters and all the rest of the good folks at the Dark Horse booth. They were all super nice.

Lastly, while we're on the topic of Knight Errant, I should mention that issue one hits stands tomorrow, so if you find yourself nearby a comic shop sometime soon, please do check it out.

Dude, that Mass Effect cover is awesome. I'm a massive fan of that game, so really cool to see you doing covers for it.

Look forward to hearing more about your new blog feature.

im playing through mass effect 2 right now and i love how martin sheen is the voice actor for the illusive man.

Hey Joe,
Me too! That's really the only reason I took on the job. Great game.

Kevin,
Martin Sheen is the man. That is all.

Frankly, Mass Effect is one of the only licensed properties I really wanna write for someday. That game just leaves it open for so many interesting ideas and tales!