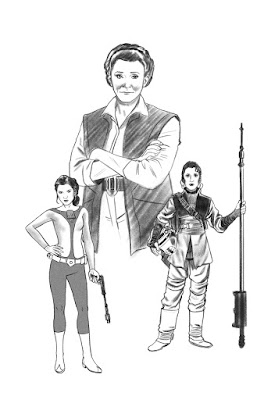 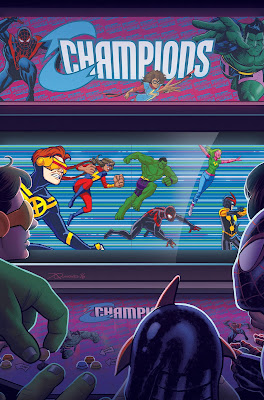 Here’s a look at my variant cover for issue #5 of Marvel’s Champions series. It’s a play on the 90′s X-Men arcade game that I spent too much time playing as a kid. Had a lot of fun making the pixel art and homage Jim Lee and Romita style drawings of Ms. Marvel, Hulk and Spider-man.
Posted by Mr. Joe at 1:58 PM No comments: 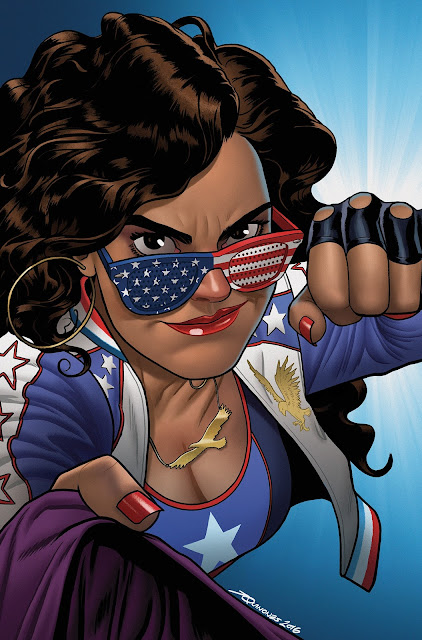 Next year Marvel will be launching a new series focusing on the fan-favorite character of America Chavez, written by YA novelist Gabby Rivera and drawn by me. I couldn't be more excited -- I fell in love with the character during Jamie McKelvie and Kieron Gillen's run on Young Avengers, and am so looking forward to taking a stab at the character with Gabby. Hoping to do America justice. In the meantime, here's a look at the cover to issue one. You can read more about the new series and hear more from Gabby and I here and here. 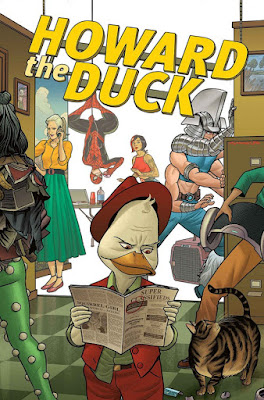 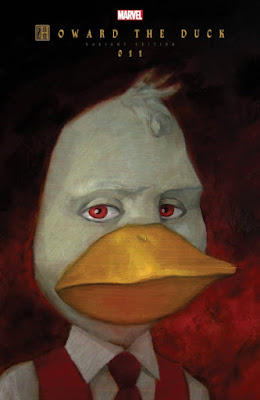 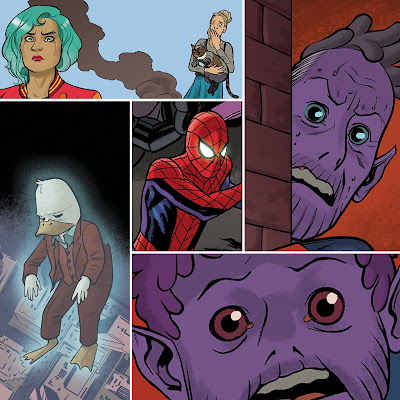 HOWARD THE DUCK #11 came out today, and it marks the end of a 16-issue run that Chip and I began nearly 2 years ago.
Chip’s scripts have been brilliant from the start; touching, fun, funny and just a blast to draw. Poking fun at Marvel, while also saying some deeply emotional things about friendship and love - somehow accomplishing this in a book about an alien duck with a cybernetic cat. Who knew?
Huge thanks to Wil Moss who had the vision of bringing Howard back to Marvel, and saw fit to bring in Chip and I as the team to do it. He kept us on point, and helped facilitate the fun throughout. Thanks for letting Chip and I make my cat a MARVEL character.
Thanks to Veronica Fish and Kevin Maguire for their tremendous fill-in issues.
Thanks to Joe Rivera, who came on as my inker early on and has made beautiful work of my crappy pencils issue after issue. Thanks as well to Paolo Rivera, Goran Sudzuka and Marc Deering for their stunning ink work in the face of some hard deadlines along the way.
Thanks to Rico Renzi for his beautifully poppy color palettes, which helped launch our new version of Howard. And thanks to Jordan Gibson, whose innate, strong color sense, helped me realize the colors of each issue of this last arc.
Thanks to pals Ryan North and Erica Henderson for having fun with us for our SQUIRREL GIRL/HOWARD crossover.
THANK GOD FOR THE KRA-VAN.
Thanks to LEA THOMPSON (OH MY GOD) for agreeing to appear in our dumb duck book.
Thanks to all the Howard crew, editors, assistant editors, letterers, back-up artists & writers, cover artists et al for keeping this book fun and lively and worthy of its cover price.
And finally, thanks to you readers out there. This was my first ongoing series for any publisher, and though we all decided this was the right place/moment for us to leave, I will truly miss it.
Waugh.
Biggs4eva.
Posted by Mr. Joe at 8:22 PM No comments:

Howard the Duck and Lea Thompson 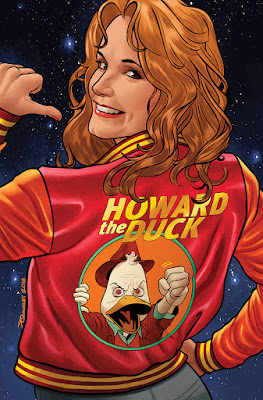 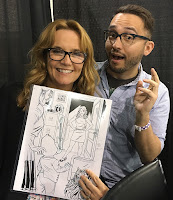 Okay *SPOILERS* if you haven’t seen the announcement already online, but yesterday Howard the Duck #8 hit the stands and features a cameo appearance by none other than Lea Thompson herself!
I’ve long been a fan of Lea’s from her work on the Back to the Future trilogy, but also loved her performance in Marvel’s first feature film, Howard the Duck. It turns out Chip is also a big fan (why wouldn’t he be?) and so a year ago we started brainstorming ideas on just how we could incorporate Lea into our book. Thankfully our AMAZING editor Wil Moss and Marvel were up for it, and so it just came down to whether or not we could get Lea to say yes. Thankfully she seems to carry a soft spot for Howard and agreed to join us for an issue of inanity.
I had the pleasure of meeting Lea last weekend at Wizard World Philadelphia, where I presented her with the original art of her first cameo appearance. She was as delightful as you might hope and unabashedly proud of her work on Howard (as she should be). So glad this all worked out!
Come back next month for a Lea Thompson filled issue with Howard the Duck #9! Here’s Chip’s solicit:
(W) Chip Zdarsky (A/CA) Joe Quinones
From Marvel Comics. Howard is back in New York City! And on his strangest case yet: A missing person! His client? The missing person! WHAAA-? Join us as Howard encounters aliens, Brooklyn and network television with a Special Guest Star so shocking that I am still shocked that we’re allowed to do this.Seriously. Rated T+. Scheduled to ship 07/20/16. (161)
Here’s a link to the announcement:
http://www.hollywoodreporter.com/heat-vision/howard-duck-movie-star-returns-900386
And a link to the announcement of my variant cover for the issue:
http://marvel.com/news/comics/26272/lea_thompson_reunites_with_howard_the_duck
WAUGH!
Posted by Mr. Joe at 3:47 PM 1 comment: 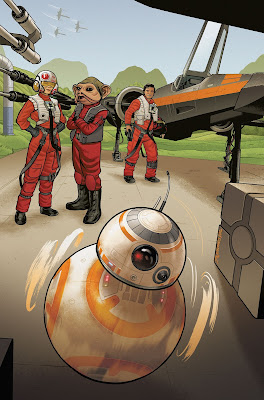 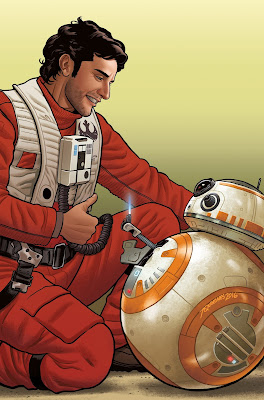 Poe Dameron! BB-8! I love them. I love them both. Here are two variant covers I did for Marvel's new comic about our ace Resistance pilot, the first issue of which is out today. Written by the great Charles Soule and drawn by the amazingly talented Phil Noto, it's well worth reading. Check it out! 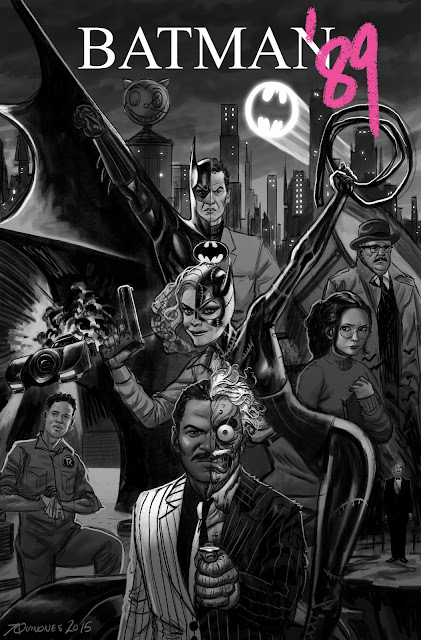 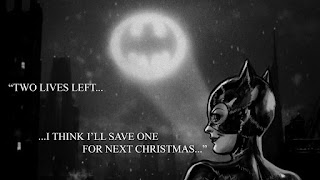 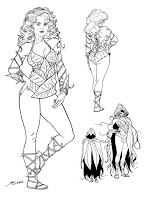 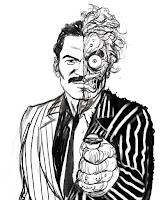 Batman ‘89
Above is a bunch of proof of concept art I did for a Batman miniseries pitch Kate Leth and I put together last year.
Inspired by DC’s recent Batman ‘66 series, our story would have picked up the threads left by Tim Burton’s Batman Returns. We would have seen the return of Selina Kyle/ Catwoman as well as introductions to ‘Burton-verse’ versions of Robin, Barbara Gordon/Batgirl, Harley Quinn and Poison Ivy. It also would have showcased the turn of Billy Dee Williams’ Harvey Dent into Two-Face.
We had a lot of fun ideas for the series overall, but in the end it was turned down. Regardless, these were fun a lot of fun to draw and Kate and I got to bond over our love of Michelle Pfeiffer’s Catwoman.
Meow.
Posted by Mr. Joe at 9:12 PM 26 comments: 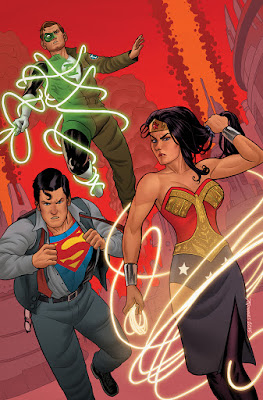 Here’s a look at my variant cover for Superman/Wonder Woman #21, out this Wednesday!
I was asked to make a cover featuring both title characters alongside Green Lantern, each in dynamic poses of some kind. The image of Clark Kent transforming into Superman is pretty typical and iconic, but such imagery is seldom seen or thought of with other heroes. I thought it’d be neat to depict the trio all transitioning into their alter-egos, each in unique ways. It was also an opportunity to cameo my iteration of Hal Jordan, first featured in Wednesday Comics in 2009.
Enjoy!
Posted by Mr. Joe at 3:55 PM 1 comment: 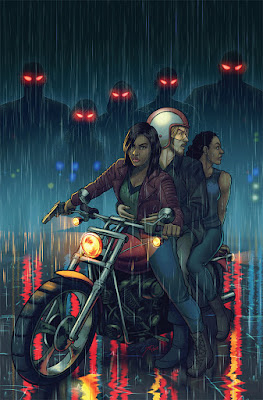 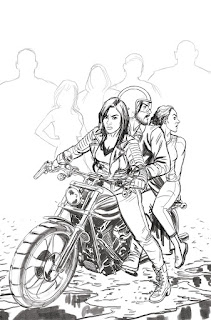 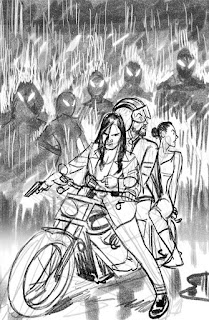 For anyone who missed it, here’s a look at my and emmyc ‘s cover to Sleepy Hollow: Providence, issue 2. Digital pencils by me, colors and inks by Emmy. As you can see, Emmy, has an amazing sense of color, and really nailed it with all the light effects here. So much fun collaborating on these.
Posted by Mr. Joe at 2:40 PM No comments:

I'll be over in Artist Alley at table 910, selling books, prints and taking commissions. Come on by!

Here are my prices for the show:

I'll be taking a new commission list each day, so try and find me early!


I'll also be on a few panels. Here's the run-down:

Jason Latour's "Live Drawl" panel wherein myself, Tula Lotay and Babs Tarr will do live drawings on stage to be auctioned off for charity. Room and time to be announced.


Hope to see you there! 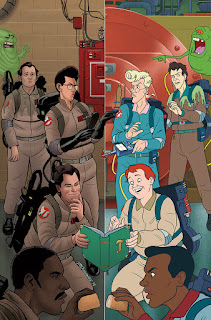 Just saw this released online - my cover for issue 3 of IDW’s Ghostbuster: Get Real series.
I’m a HUGE fan of the movies and the animated series, and had been itching to make an image like this for the longest time. Thanks to IDW and Tom Waltz for that chance.
Hope you like!
Posted by Mr. Joe at 9:24 AM No comments:

Howard the Duck: The Covers That Weren't 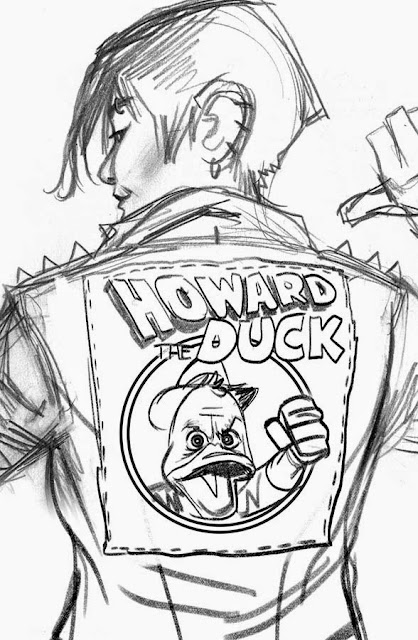 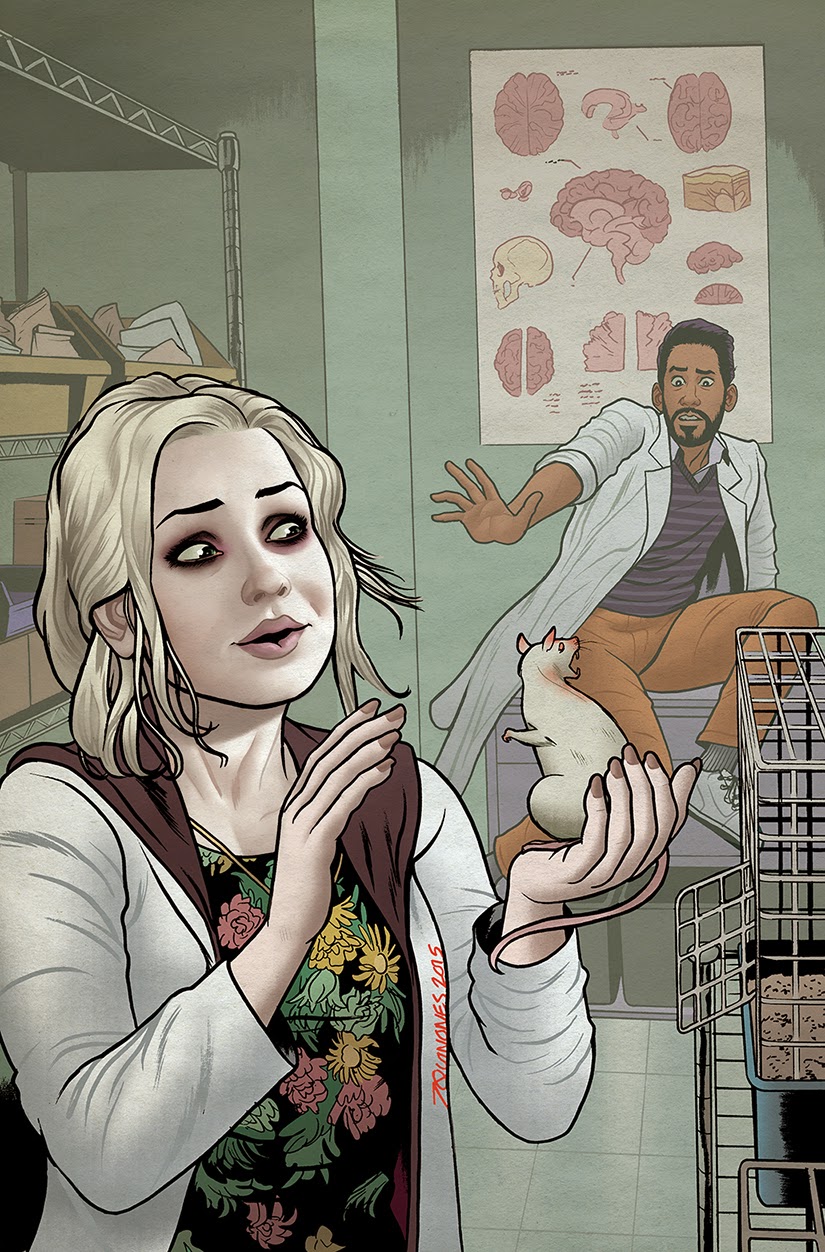 Here's a promotional image I was asked to draw for the CW show iZombie based on the comic book of the same name, created by Chris Roberson and Mike Allred. It was a great book and makes for some pretty durned fun television as well! This image is a tease for tonight's episode-- ZOMBIE RAT!! 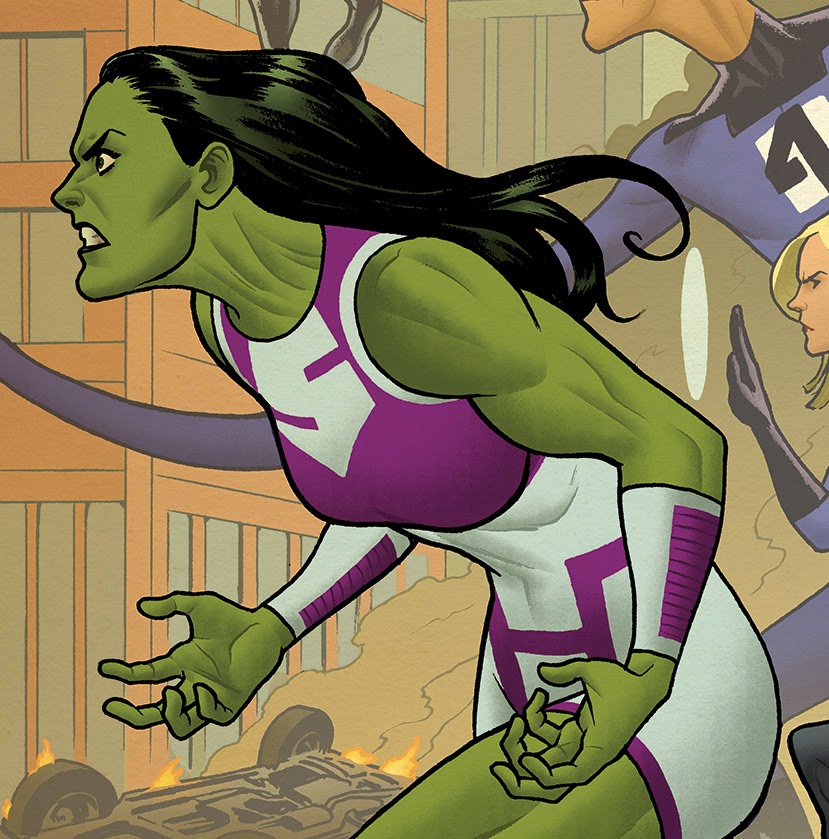 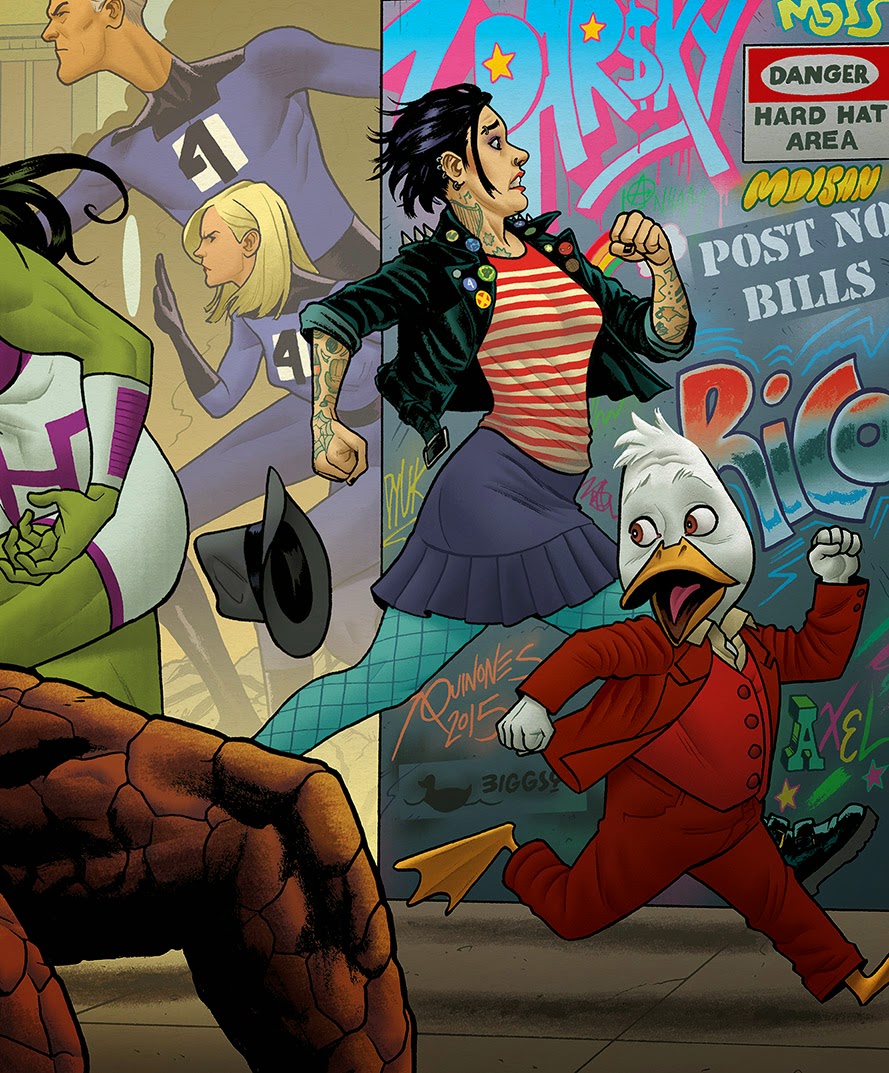 Say now, Marvel solicited issue 5 of Howard the Duck! Here's a look at my cover - read below for Chip's issue synopsis.

CHIP ZDARSKY (w) • JOE QUINONES (a/C)
Variant cover by HOWARD CHAYKIN
• While the world’s greatest super heroes fight to save NYC – and possibly America and parts of Canada – Howard and Tara Tam learn a lot about each other, and themselves.
• Communication is key in life. Be inquisitive about the people you surround yourself with.
• RETAILER NOTE: This issue is a HOWARD THE DUCK #4 tie-in!
32 PGS./Rated T+ …$3.99
Posted by Mr. Joe at 1:42 PM No comments: 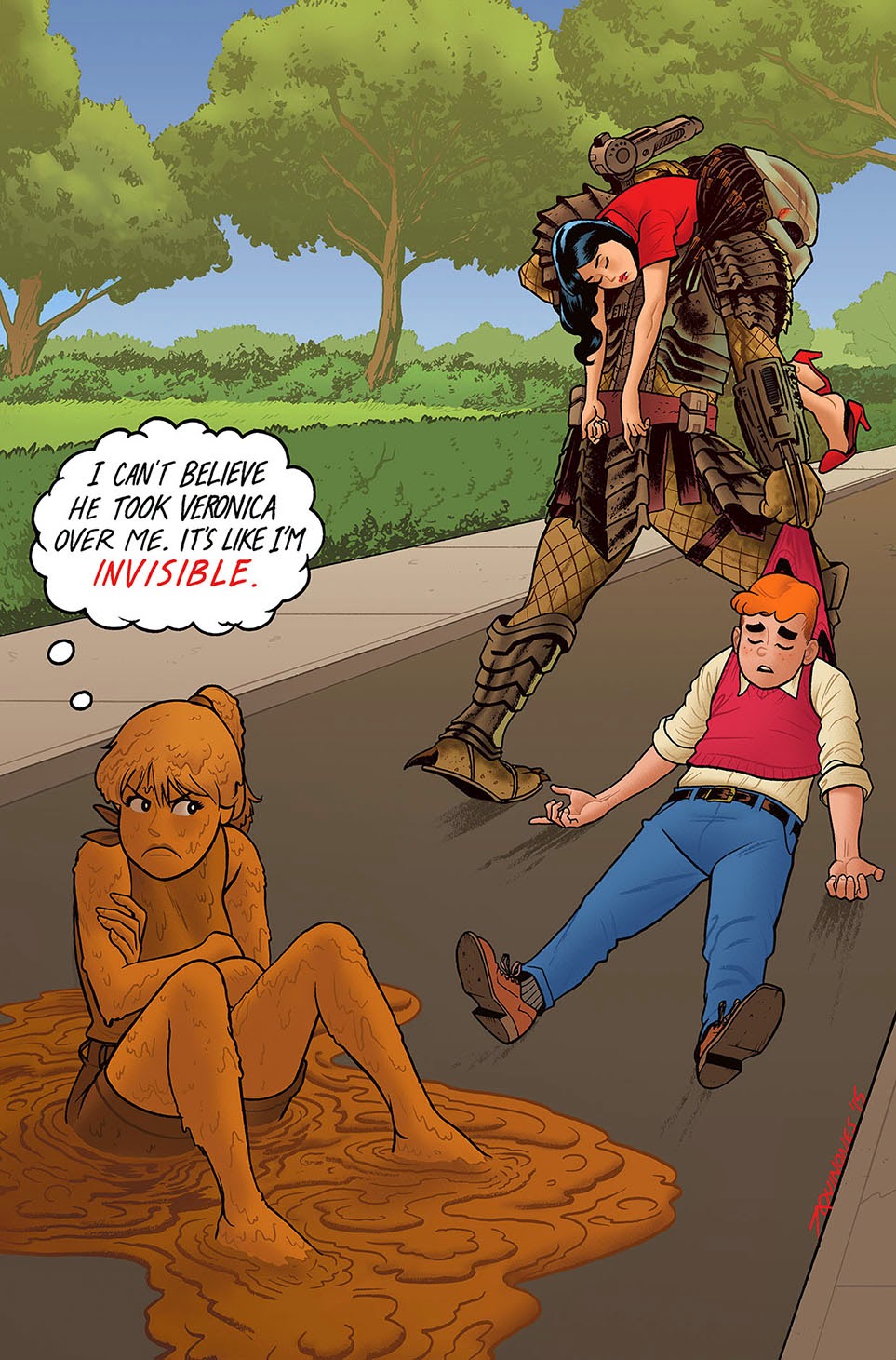 “Preddy & Veronica.”
A cover for the upcoming “Archie vs. Predator” (AvP) series from Dark Horse and Archie Comics.
Posted by Mr. Joe at 7:38 PM No comments:

Howard the Duck #2: Out today! 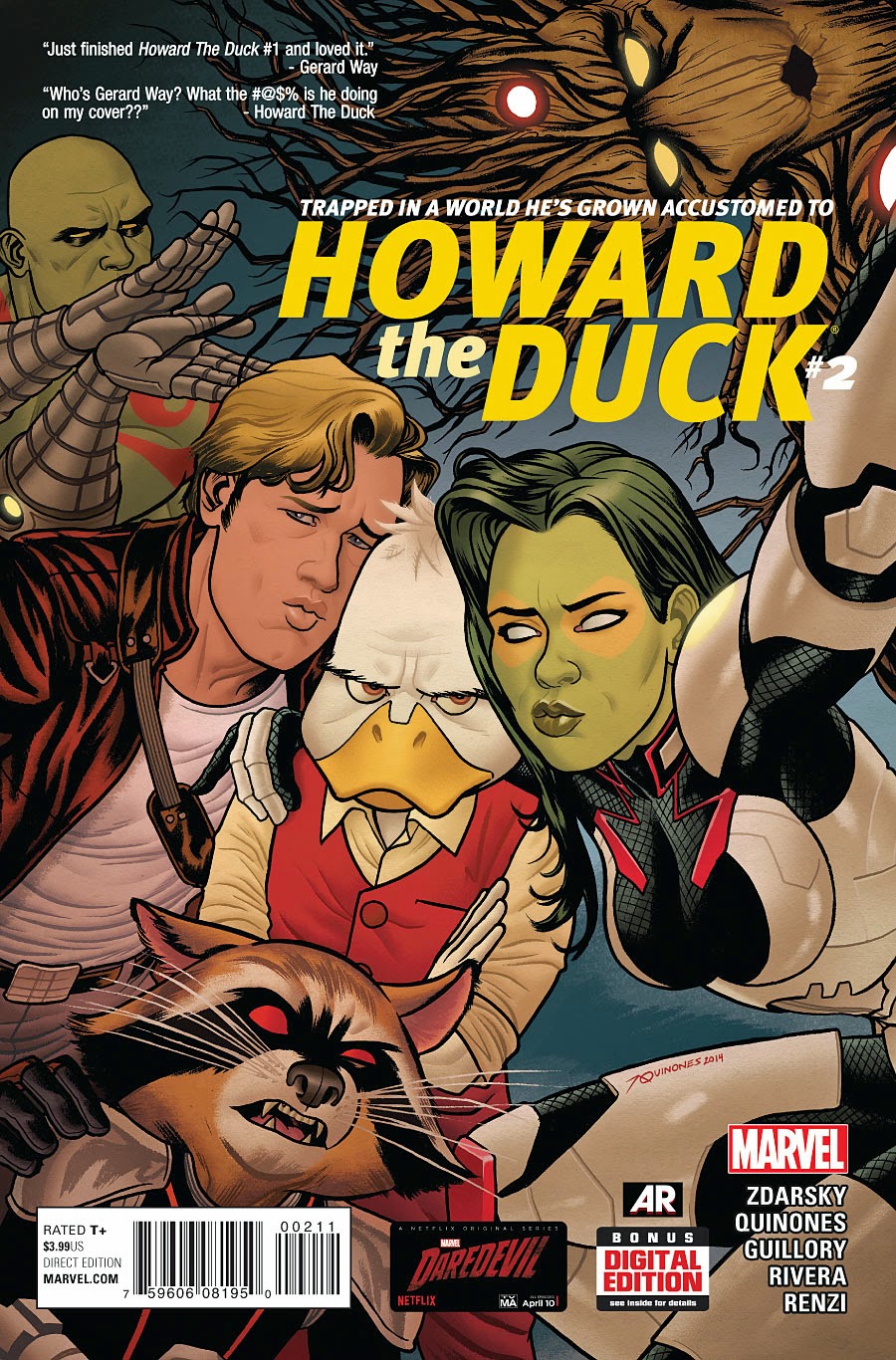 WAUGH! IT'S TRUE!
Written by Chip Zdarsky, with pencils by me, inks by Eisner-award winning artist Joe Rivera, and colors by the ever talented Rico Renzi.

I really had a lot of fun with this one. Chip's scripts have been really smart and funny to work on, giving my a lot to sink my teeth into. This was my first time having an inker on a big book, and Joe (Rivera) did an absolutely stellar job. Rico as ever has been knocking it out of the park with his bold color work --

Here's a look at a page from the issue, progressing from my pencils to Joe's inks, to Rico's colors. I hope you'll pick this one up! 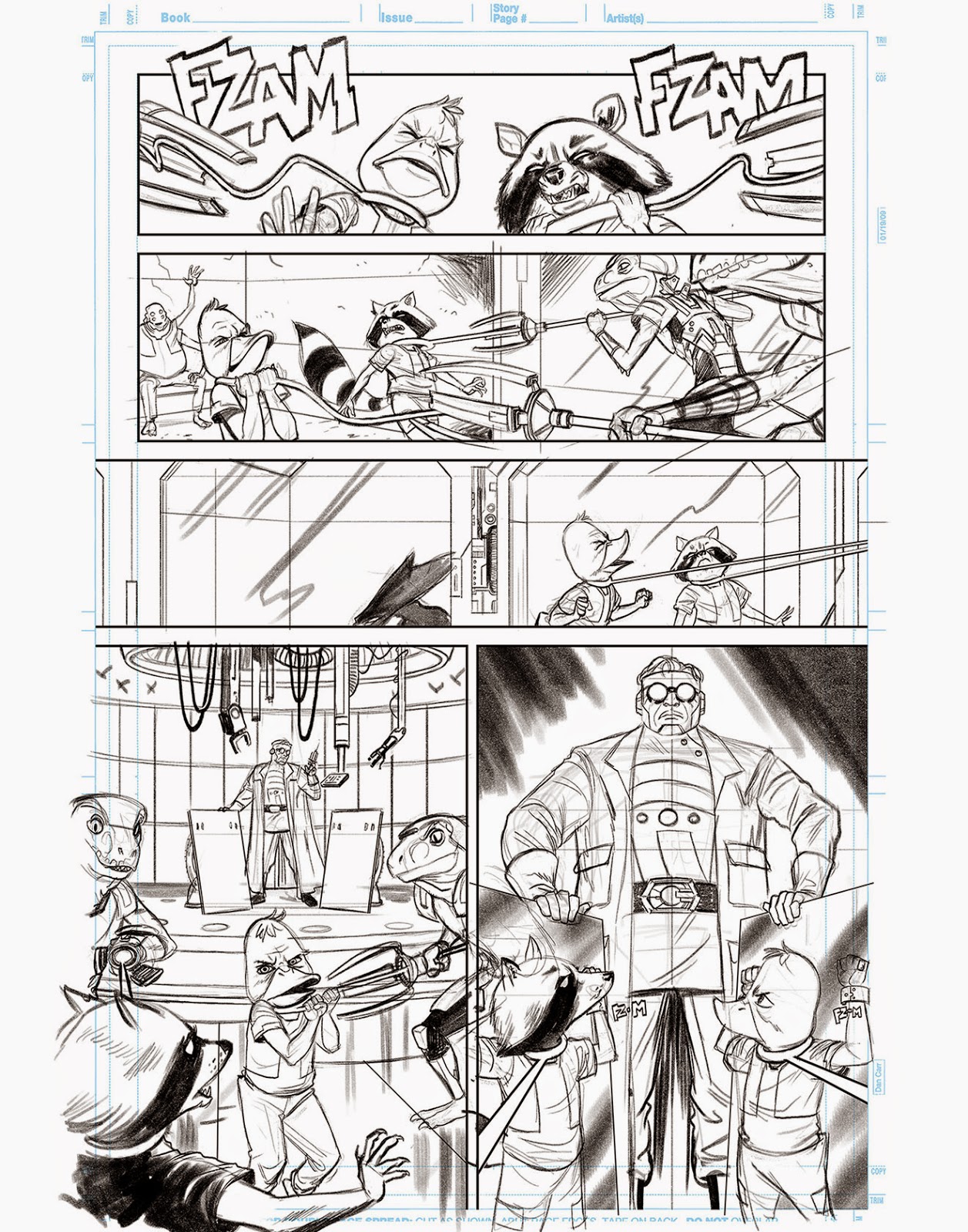 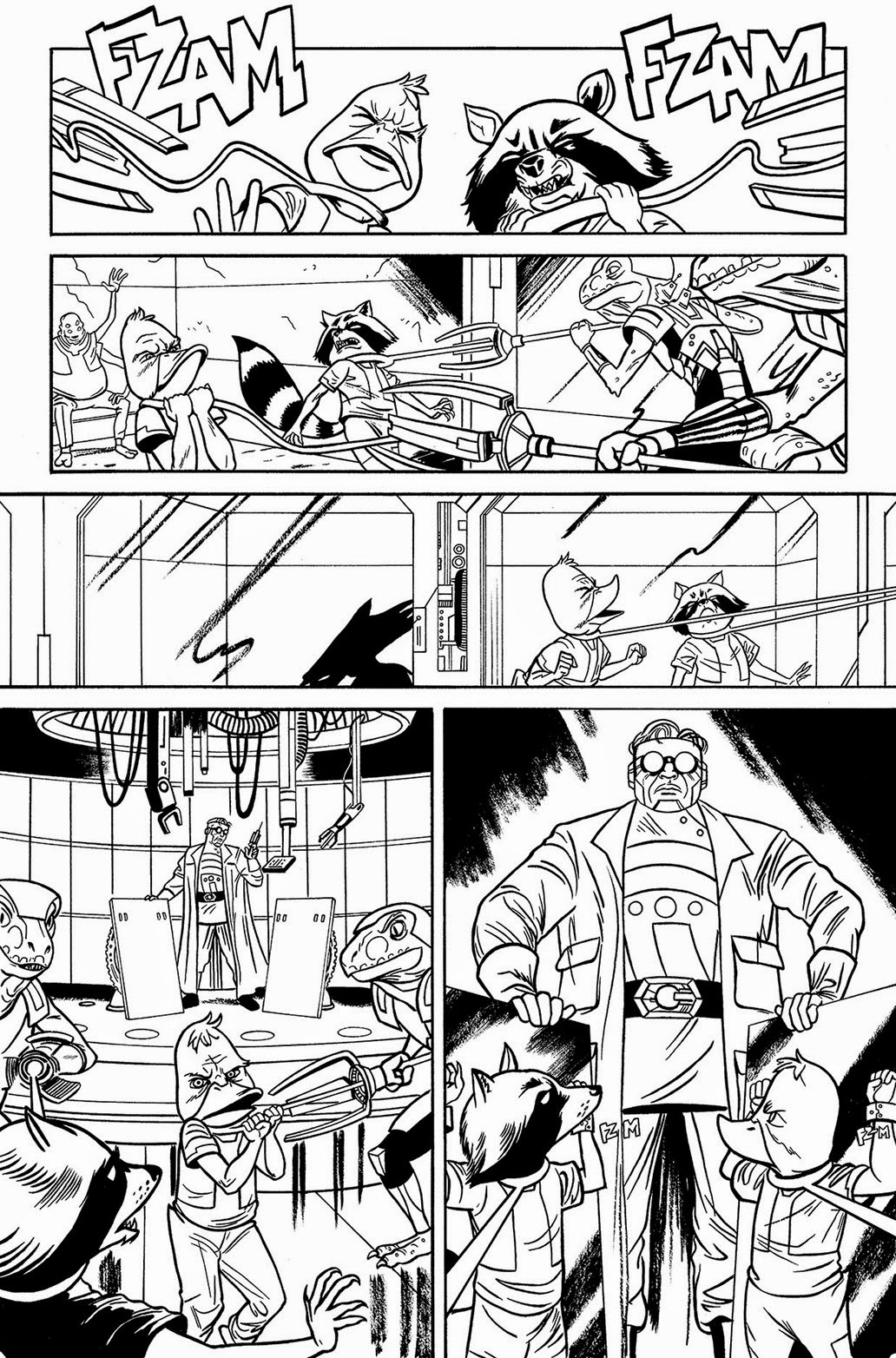 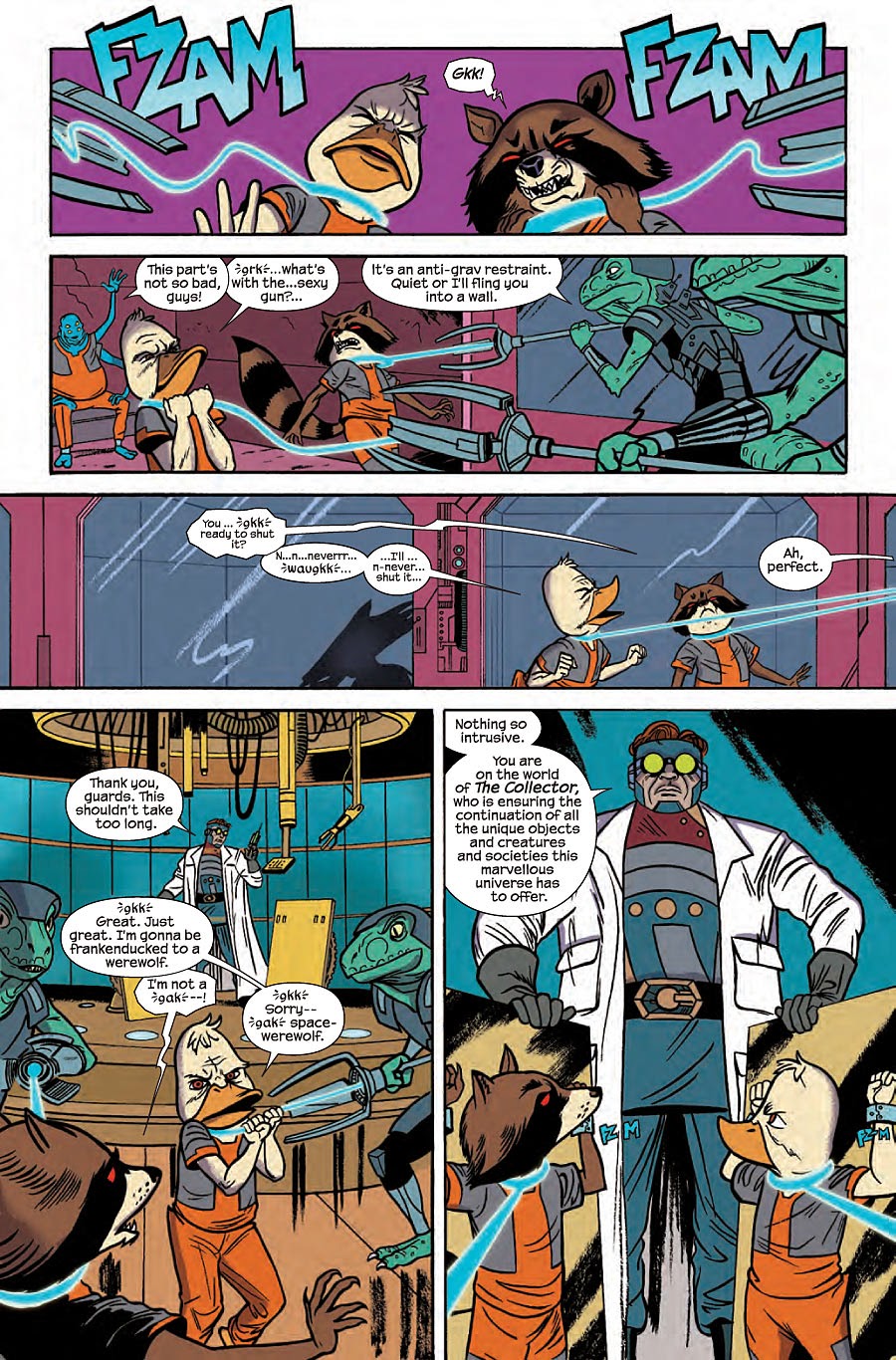 For all you smart phone-havers, be sure to download the Marvel "AR" (augmented reality) app for a special instructional video that I made with my friend and internet sensation, Neil Cicierega!

"How to take a Duck Pic" 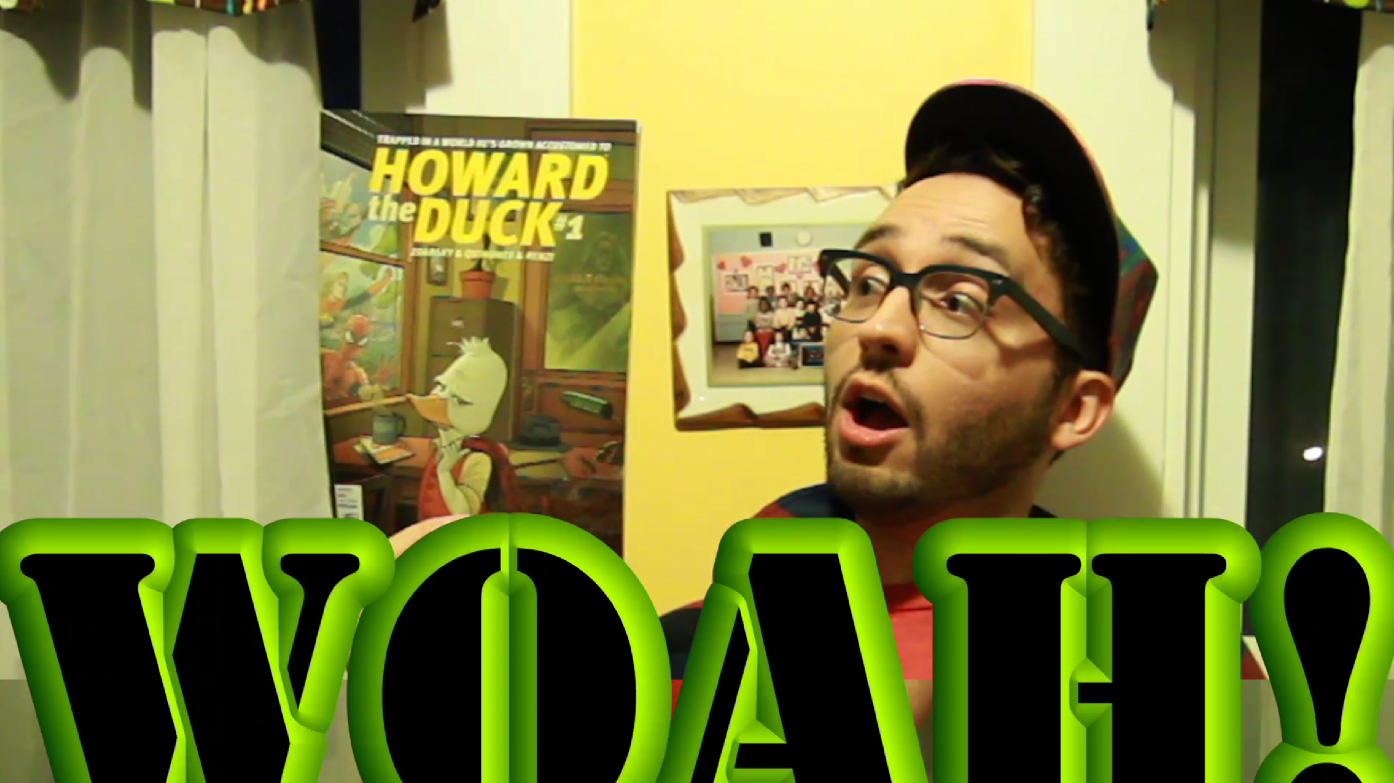 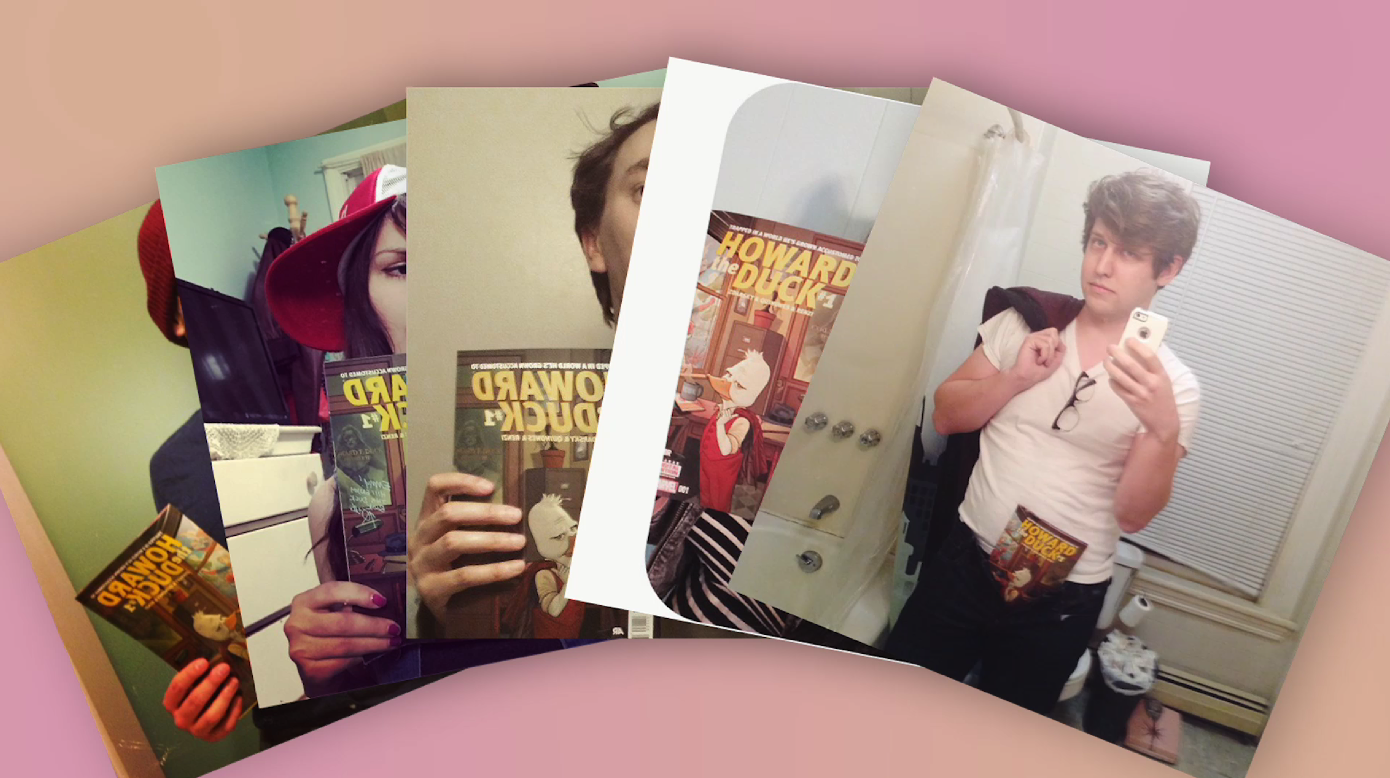