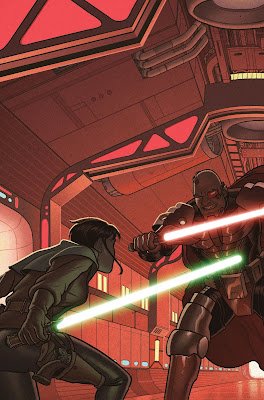 Above is the third cover in the series; a bit of an homage to famous Star Wars production painter and concept artist, Ralph McQuarrie. I've long been a fan of Mr. McQuarrie's work, so it was a ton of fun doing this piece. Hope you like!

From everything I've heard and seen, 'Celebration V' sounds like it was a total blast. I'm hugely jealous of anyone who got to go. Though I suppose as a consolation, some of my artwork came along for the ride --

It's none other than the 'Knight Errant' herself, Kerra Holt! Woah -- she's a real person? Apparently Dark Horse commissioned a young lady to galavant around the convention floor dressed as our jade saber-wielding heroine. Neat!

I prefer to believe that your illustration actually CAME TO LIFE!

Beautiful! Looks like you were at 'Celebration V' in spirit, though. I remember seeing the original McQuarrie image as a kid, and it still amazes me.

That's the coolest thing I've seen today! Kudos to you for having your work blown up to epic proportions.