The conventions keep a comin'...
Well I'm back from an interesting weekend in NYC, where Maris and I attended the Museum of Comic and Cartoon Art's (MoCCA) 2008 comics Festival (mouthful!). Situated in Soho, in the beautiful 'Puck building,' we did our best to avoid the sweltering, sometimes near 100-degree heat outside, whilst selling our wares indoors. Things went pretty well all in all, despite the heat and a mysterious fire alarm that went off on Sunday - causing the building to be evacuated. Plus we got to meet the infamous Chris Haley and 'April Steele': internet celebrities!! Bonus!
Anyway, here are some commission sketches I did over the weekend. 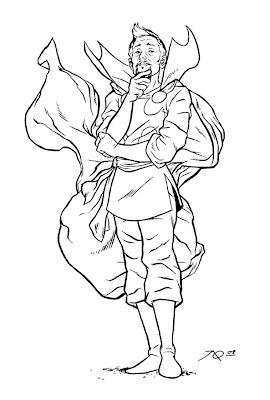 Sorry that this one is not quite in focus. I think my digital camera might be on the way out. Anyway, I was really excited to draw Mr. Strange. He's one of my favorite Marvel characters. 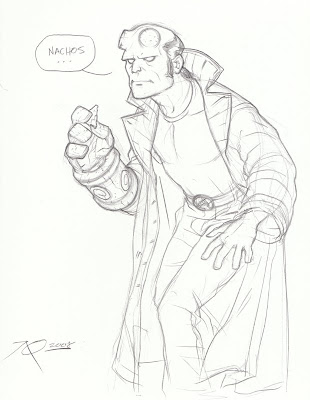 I really, really wanted to ink this one, but the guy who commissioned ordered a 'pencilled only' sketch. 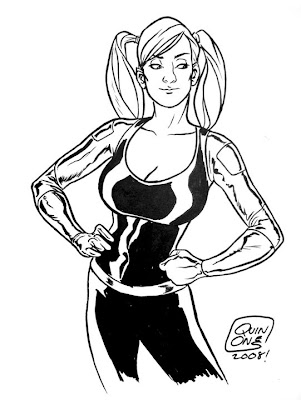 I was asked to draw this character from the mini-comic, "The Adventures of Nikki Harris," by Carter Allen. This is her... I also signed this one differently for some reason.

Okay, I've gotta run out and buy an air conditioner now. THIS HEAT IS KILLING MEEEEEE.....*
Posted by Mr. Joe at 3:03 PM

Hey Joe! I'm the guy that commisioned the Hellboy..funny, when I got home, I was like 'I should have had him ink that!'...would you be up to ink it if I mailed it to you? (for the xtra dough, of course). I'd actually like to commission you for one or two more! Love your stuff, man.-Justin

PSS you can see a clean scan of the pencils over at my ComicArtFans gallery:
http://www.comicartfans.com/GalleryPiece.asp?Piece=393034&GSub=61528

Ha ha ha, awesome! That Nikki Harris one is sweet!

Wish it wasn't so dang hot in NYC, but MoCCA was great. Thanks for the Nikki!

dang, i'm an internet celebrity? who knew?! why is my name in quotes? why is anything anything?
it was great meeting you guys. thanks for the linkage!

i'm about to email you with our address.

'Keeper's Notes' - Thanks for the commission, man! I had a lot of fun drawing it. I would definitely ink it, if you wanted to mail it to me. Certainly I'd be up for doing other sketches as well.
e-mail me for more info: me(at)joequinones(dot)net

Thanks, Coach and Capprotti!
April! I put quotes around your name because I just wasn't sure whether or not "April Steele" was in fact your real name. I mean, it sound like a superhero nam--unless... are you a superhero?

p.s. you and Chris are internet celebrities to me!

oh man, i was secretly hoping that was the reason. it is indeed my real name. and i may very well be a superhero but you know, gotta protect my loved ones and such.

Oh, and of course, as if I didn't fanboy out enough in person, the sketch you two did for me was my favorite thing from the entire trip ... and I got some really awesome stuff there as my blog will soon attest.
I could tell it had that extra special secret ingredient called love in it.
So, extra special thanks again.
It was also great finally real life meeting you guys.

That Dr. Strange is perfect!