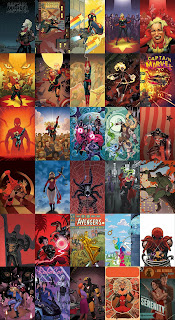 2013: A Year In Covers
Hey all! Here's a look at all of my covers from 2013. Some were published this year, but drawn in the latter end of 2012, and a couple others were drawn this year, but won't see print until 2014, but you get the picture.
Big thanks to colorists Maris Wicks (Robocop, Fionna & Cake), Matt Wilson (New Avengers, Aliens vs. Parker), and Kelsey Shannon (Alpha, Captain Marvel 16), for contributing their amazing coloring sensibilities on a few of these.
Thanks also go out to my editors at Marvel, DC, Boom and Dark Horse, for having me on to do all of these in the first place. They were great fun.
I already have some covers I'm working on currently for 2014, so here's hoping for another good year! Onward!
Posted by Mr. Joe at 11:44 AM