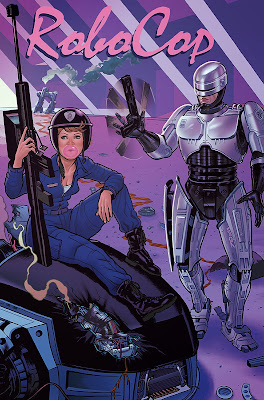 “You give me a time and a place, I give you a five minute window. Anything happens in that five minutes and I’m yours.” “Dead or alive, you’re coming with me.”
Above is a New York Comic Con exclusive cover that I did for issue 1 of Boom’s new series, Robocop: Last Stand, written by Frank Miller. Colors by Maris Wicks.
I’m a BIG fan of the original film, so it was a ton of fun getting to revisit that world.
It hadn’t even entered my mind to make a parallel between the world of Verhoeven’s ‘Old Detroit’ and the movie Drive until after Maris got to laying in the lush purples and pinks that you see above. As a joke I found a free font that mimicked the one used in the movie, typed in “Robocop”, and sent it to my editor. He liked it so much, he told me to keep it in there for the print version!
You’ll be able to get these at BOOM! studios booth, #1344, at New York Comic Con next week, October 10th-13th. I’ll be doing signings   for the cover at their booth on both Thursday and Friday. Specific times to be announced soon.