I often like to cast real people into the roles of characters I draw in comics. It's a way for me to make sure that the characters I draw each have a distinctive look, so that I don't just keep drawing the same template. Sometimes I'll look at a couple different celebrities which I'll amalgam into a single character. Other times I'll cast actual people that I know. In this case, I cast my good pal Michael as none other than web-slinging superhero/freelance photographer, Peter Parker!

He was unaware that Peter would be depicted dressed as a goth in this issue.

This still remains the one and only time I've gotten to draw Peter, but should I again, Mike will be my go to guy. I think he makes a great Spidey. 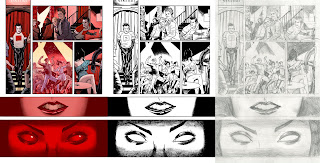 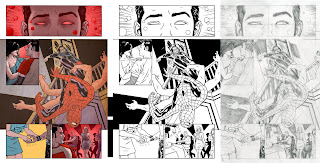 And your friend has an awesome mustache. I wish even one of my friends had a 'stach that rad...I guess I'll just have to carry that torch alone. Ha-ha-ha!

What ratio of your pages are references?

Thanks Hannah! I aim to please :)

Jeff - Yuuup. As he should. Those leather vinyl pants have got to be constricting. Although he does spend his days running around Manhattan wearing a leotard...

And yes, my friend does grow an awesome 'stache. If I could grow one as good as he, I'd certainly be wearing it right now.

J.S. - Hmmm. I dunno... I've never actually counted. I do look at my computer fairly often for reference, whether looking for pictures of a revolver, or fine tuning. Often, I'll even use photobooth as a mirror to get a sense of a pose. As for a ratio of non-referenced pages, to referenced pages? Probably 2:1?

I really love the texture you're getting on the pants. How are you doing that?

Thanks. It's just a simple dry brush with my trusty winsor & newton, series 7 no.3