Mass Effect: Evolution of a cover 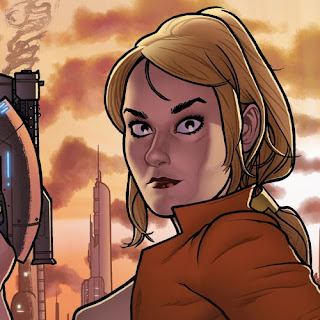 Welcome back dear readers. Today we will be looking at one of my recent covers for the oncoming Mass Effect: Evolution series. 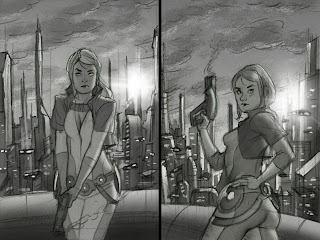 As always, things start out in my sketchbook. Above are the two thumbnails I'd submitted for approval. Darkhorse's only stipulation was that they wanted the character featured here to give off a kind of 'Ripley from Aliens', sort of badass vibe; sexy, yet tough. I tried to make the two sketches showcase both attributes - each emphasizing one over the other. 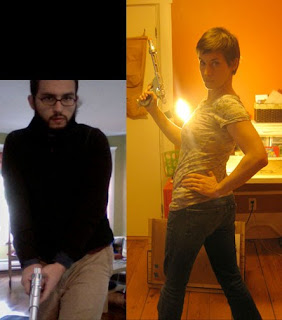 In the end, they went with the 'sexy' one. What with my lack of a womanly figure, I asked my studio-mate Maris to fill in- mostly looking at the particulars of hip and hand placement. 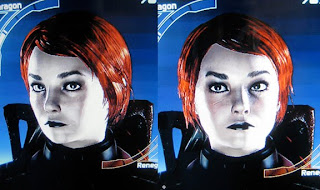 Having played through the first two Mass Effect games, and enjoying them both very much, I had wanted to sneak in my own 'Commander Shepard' since I signed up for the series. Finally I had my chance! My female Shepard was my sole reference for the characters' face. And yes, I understand how INCREDIBLY NERDY this is. I make no apologies. 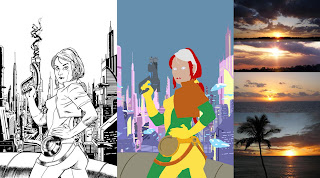 Here, from left to right we have a look at the inks (by me) and initial flats by Orpheus. I'm including the flats here because I thought it hilarious that Orpheus thought to flat the character as Rogue from the X-men. Well played good sir. The photos on the right, I had been looking at as reference for the clouds I knew I wanted to paint in that blank open sky. 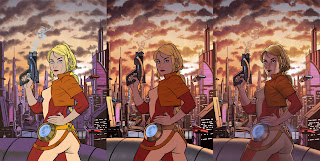 Lastly, here's a look at the progression in coloring. The environment behind her was clearly the most complex thing to paint here, so I worked on fleshing that out first, then back to the figure in the foreground.

And that about does it for another 'Photobooth Friday'. Merry Christmas, dudes!
Posted by Mr. Joe at 11:55 AM

That Orpheus kills me.