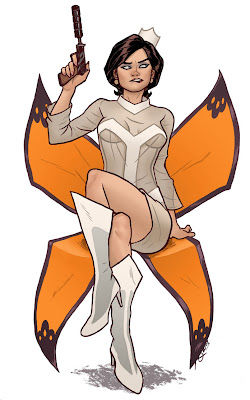 So this past summer I was attending the Wizard World Convention in Philadelphia, where I had the pleasure of hanging out with fellow comic artists, Reau and Mike. One of the nights after the convention we were hanging out drawing, and got onto the subject of the television show, 'The Venture Bros. We got to talking about how much we love the show, and Mike in turn whipped up this really awesome Brock Sampson sketch. I told him in response, I would do a drawing of one of my favorite characters from the show, Dr. Girlfriend. Five months have passed since then (I suck), but I finally did it. Hope you like it.

As I was doing this I couldn't quite decide between which two of the character's costumes I'd want to draw her in - So I did both. You can see the other design on my livejournal here.
Posted by Mr. Joe at 11:30 PM

Ha ha ha, look at that! Nice Joe! Definitely worth the wait. Tough call on the costumes and good call on mixing them! I wonder if her legs are crossed to hide the bulge... hmmm...

Hey Joe, what do you use to make those great lines? What do you use to ink? I love your art and I'm a huge fan. I can pencil but I just can't get a handle on inking meanly because I don't have a clue what to use.

Awesome. I can't decide which costume I like best.
I'm glad you didn't bother with her Lady Au Pair identity, although I'd love to see your version of the murderous moppets. Or the Pupae Twins.

You might be tickled to know that Derrick and I went as The Monarch & Dr. Girlfriend for Halloween this year. I did not wear the Queen Etherea costume, though.

capprotti-
Thanks Mike! No comment as to the existence of a hidden 'bulge.'
Shiloh-
Mostly I ink in mechanical pen and brush and ink. Most of my sketches (and increasingly, a lot of professional work) are inked now with the Pentell Pocket Brush Pen. Which is a really great portable brush pen, with a refillable ink well. I highly recommend it.
Mo -
I'm also not so big a fan of the 'Lady Au Pair' costume. Though I completely forgot about the moppets! Maybe they'll appear in a future Venture themed drawing.
Dyana- I am very tickled by the fact that you and Derick were the Monarch and Dr. Girlfriend for Halloween. I WANT PICTURES. (Oh and good call on not going with the Queen Etherea version.... scandalous.)

There are a few pictures on Facebook, if you want to look there, but in the meantime there is this:

Not the greatest Dr. Girlfriend costume of all time, but I was still recognized by a few people.