Once more the crew over at Project: Rooftop have come together with another redesign challenge. This time the focus was placed on none other than the bat-transforming, blood lusting Vampirella. Generally the character is wearing very little in terms of clothing, so I did my best to make the costume slightly more modest (and functional), while still alluring. I was also kinda thinking Audrey Hepburn as I was drawing it. Anyway, enjoy! 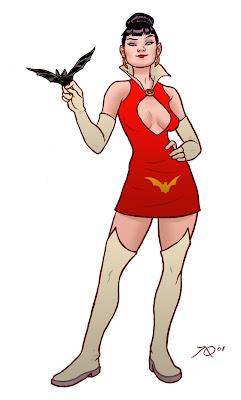 Update: I won Second Prize! Thanks go out to the Project: Rooftop staff, along with guest judges - Trina Robbins, Joe Jusko, and Dan Brereton. There were a ton of great entries, including the brilliant grand prize winner by Ralph Niese, as well as runner up entries by Ming Doyle, Adam Cadwell and many more.
Certainly check out Maris's super cute runner up Vampi design, as well as Liz Prince's good humored, Count Chocula revision of the character.
Posted by Mr. Joe at 2:12 PM

I also submitted a design for the "ReVamp" and there are two people's designs I was afraid of seeing, Daniel Krall's and yours.
This is a great piece, while I went for a more kick-ass Vampi you've gone for a really elegant version of the character and the big success here is that I instantly thought Vampirella. Also it's another great illustration.
Damn you, Joe Quinones!

--Adam (Cadwell) post your Vampirella piece! I can't find it on any of your sites!

OH my god, Lauren. PLEASE do a Wonder Woman redesign anyway. I'd love to see what you would come up with.

Great Illustration.
I also submitted to the "ReVamp".
Your work is very inspiring.

thank you monsieur joe! real glad you dig my stuff like i dig yours! ^__^! keep in touch! best greets, Ralph

congratulation for the second place on the vapirella revamp, I also send a design but it wast an nearly good as yours.

sorry about the crappy English (Argentinian)

Thanks Emiliano! Just took a peek over at your Vampi redesign. Like those bat leggings - nice design element.
And no worries on your english. I speak pretty crappy spanish. I'm sure it's far worse than your english.

So, out of curiosity, how much of your work is digital?

Well, not the con sketches, I'm not THAT stupid, haha.

Hey Bob,
Though my work is almost never entirely digital, most of what I do these days does go through the computer at some point. This Vampirella piece was drawn in my sketchbook, then inked in brush and mechanical pen, and colored in Photoshop 7. ( I really need to update to CS)

I really do think that yours was the best one. I was coming up with something similar but she was going to have longer dress. Anyway Im glad I didn't 'cause it wouldn't have even come close to yours. Great job!