Does anyone remember Nintendo's MarioPaint™? It was this cool game for the Super Nintendo that came with a tablet and mouse. In it you could draw, paint and make very short animations. Somewhere in my parent's basement is a VHS tape full of MarioPaint creations. Well this isn't quite that, but it's definitely of equal coolness (if not greater). My friend Juan got me this game (peripheral?) that is basically an empty Nintendo DS cartridge onto which you can upload specialized OS systems and programs as well as other games. I'm not entirely interested in the pirating feature, but I am extremely psyched about one program that came already loaded onto the disk. The program, "Colors!" is basically a painting program in which you use the DS's stylus and touch screen to draw/paint. I must say, it's awesome.

Here's the first quick sketch I did with it. 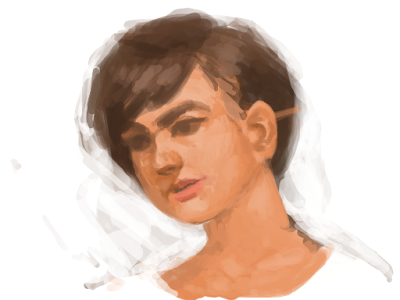 Nothing too spectacular, but it was a lot of fun to make, and I was surprised at how much detail was possible in the program and on such a tiny screen. I decided to do a portrait next - 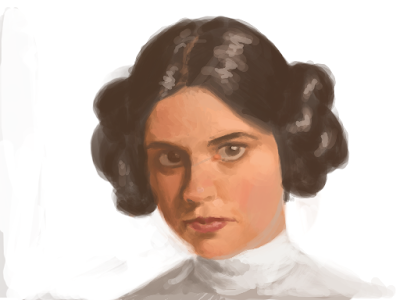 Again, nothing spectacular, but I was even more excited after my second sketch. It's like a little miniature water color set I can take around with me anywhere and doodle. It's also the closest I'll get to something like this for a while I'm guessing.
Anyway, I'll try and post more DS sketches in the future. 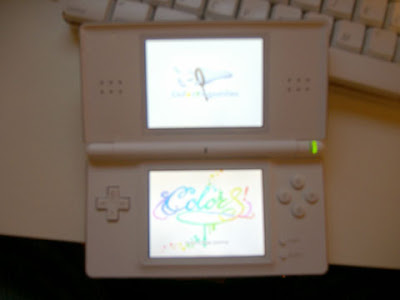 These look amazing! Here's the link to the online community site:
http://www.collectingsmiles.com/colors/

Much props to the person that programed this.

Ha ha ha, yeeeaaaa... holy shit dude! I was some sketches Sparth did on his blog and it totally blew my mind! I think it's official... I mush have a DS! Time to make those hints a little more obvious this christmas. :-P